In this visit, Ms. Helen Clark and her delegation went for a sightseeing tour of the World Heritage City of Luangprabang province include: Wat Visounarath, Wat Xiengthong and the Royal Palace and then they visited UNDP/FAO agrobiodiversity project site (Villages engaged in the production of oyster mushrooms). Ms. Helen Clark and her delegation also visited UXO Clearance field, CHA and mine risk education site in Luangprabang.

The Australian high level officials visited UXO Lao Visitors Center in Luangprabang province at 3:00pm in the afternoon on 24 November 2015. This visit was very significant. The purpose of this visit was to open the small opening ceremony of this visitors center.

This Visitor Center was established on 16 March 2009 with the support of Australian Goverment, but it was damaged by short-circuit electricity on 18 June 2014 and then it has been renovated that funded by DFAT (Department of Foreign Affairs and Trade).

At the ceremony, Mr. Houmphanh CHANTHAVONG, Luangprabang provincial coordinator provided a briefing about history of UXO in Laos and then Mr. Craig Chittick, First Assistant Secretary for South-East Asia Mainland and Regional Division provided a short speech about their support to this center. This ceremony was also honorly witnessed by Mr. Vongsavanh THEPPHACHANH, Vice-Governor of Luangprabang province. After the opening ceremony, Mr. Houmphanh CHANTHAVONG guided australian high level officials tour in exhibition room and watched a UXO short film. Finally, they left this center at 4:00pm and we closed the ceremony.

For the detail please follow the link address below:

US provides funding for UXO Lao

US provides funding for UXO Lao teams to resume work

The United States has provided new support of US$2.2 million to UXO Lao, which will enable it to rehire trained technicians it lost in 2014 as a result of funding difficulties.

The UXO Lao teams will be deployed in Huaphanh, Xiengkhuang, Khammouan,  Savannakhet, Salavan, and Champasak provinces, according to a statement from US  Deputy  National Security Advisor Benjamin Rhodes on 16 October 2015. Mr Rhodes said  the United  States is committed to helping Laos clear UXO from contaminated areas in  order to reduce  casualties and to increase the productivity of agricultural land to reduce  poverty. Since  1993, the United States has provided over US$83 million in UXO-related  assistance to Laos.  In 2015, US funding totalled US$15 million. Priority funding will  support the clearance of  UXO found as a result of evidence-based surveys of  contaminated areas. Victims’ assistance  programmes will provide direct services to the  survivors of UXO accidents and their families  and help strengthen the first aid and  emergency response of key health facilities and village  volunteers in heavily impacted  provinces. Funding for risk awareness supports the education  of Lao citizens, especially  children, about the dangers of UXO. General Director of the  National Regulatory  Authority, Mr Phoukhieo Chanthasomboun, said 2015 is a turning point  for the UXO  sector, with approval of the new survey procedures that provide a stronger  evidence-based system for surveys, and implementation by all five humanitarian  clearance   operators. This system helps officials to understand clearly the scope of the  UXO problem  to better estimate the remaining UXO contamination in Laos. It also gives  the sector the  ability to plan the time and funding required to reduce or eliminate casualties from UXO accidents, he added. Mr Phoukhieo said the change includes a more systematic village by village approach in line with the new National Socio-Economic Development Plan indicators. “We have moved from a request-based approach to an evidence-based survey approach, including non-technical survey and technical survey, to establish the Confirmed Hazardous Areas (CHAs).”“Firstly, it ensures a better use of the existing resources, by clearing only UXO contaminated land, with a higher number of cluster munitions cleared per hectare. We have already observed the improved results of UXO Lao and other operators due to this new approach,” he added. Secondly, it allows multi-year planning through the allocation of CHAs among clearance operators, in line with the priorities established with local, regional, provincial and national authorities.There are now many defined CHAs waiting to be cleared and, with input from village to national level, a plan to clear these CHAs in the coming years will be developed.“This additional funding to UXO Lao will increase the pace of the survey efforts and more effective clearance; and it will contribute to the full implementation of the new evidence-based concept of operations introduced by UXO Lao at the end of 2014,” Mr Phoukhieo said.

The source is from Vientiane Times newspaper. 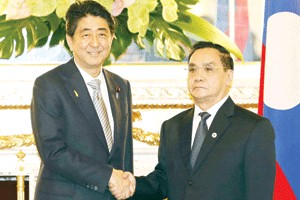