The Japanese government is supporting the Lao National Unexploded Ordnance Programme (UXO Lao) with four heavy-duty brush cutting machines to speed up the clearance of forest grass and shrubs.

An official from UXO Lao, who asked not to be named, told Vientiane Times on Thursday the Japanese government has funded the 2014-2016 project, which uses new technology as part of unexploded munitions clearance for UXO Lao. 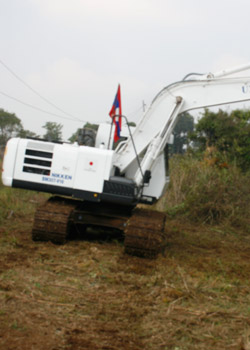 The funding is in the form of grant assistance through the Japan International Cooperation System (JICS), valued at over 67.9 billion kip.“Using these machines will actually help to clear forest grass and shrubs on parcels of contaminated land at a much faster rate,” the official said.The project has brought two heavy brush-cutting machines, also known as excavator-slashers, to Laos this year, with another two machines arriving in the next two months.Trainers from NIKKEN, Japan and the Cambodian Mine Action Centre (CMAC) are training 22 UXO Lao staffs to operate the machinery by cutting shrubs on a pilot field in Pakxong district, Champasak province.UXO Lao staff will start clearing forest grass and shrubs immediately after finishing the training course, which is taking place from February to April.Twelve employees have also learnt how to use and control the machinery by cutting shrubs in Cambodia for two months at the end of last year.Currently, UXO Lao is using local families to cut grass before UXO teams arrive to search for unexploded devices.The Japanese brush cutting machines are able to mow about eight hectares of grassland in a day compared to five or six people manually spending a month to clear one hectare.Larger trees in the clearance zone are left untouched as the machines work their way around them. A few years ago the government set a plan to clear 20,000 hectares of land per year until the year of 2020, but the best that has been achieved is 6,000 to 7,000 ha. Hopefully the new machinery will help improve this. UXO has been cleared from over 44,000 hectares of land since 1996. UXO Lao’s target is to clear unexploded ordnance from 3,490 hectares of land, but only 3,080 hectares have been cleared due to a lack of funding. More than 66,000 devices were detonated or otherwise deactivated during clearance operations.